No Support From The Mac Support Store

No Support From The Mac Support Store
No Support (Instrumental) ~ Epitome 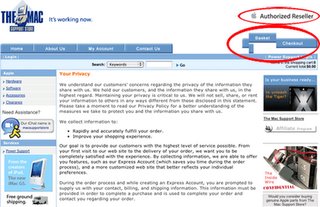 Have any readers received junk email from MacSupportStore?

I can't make up a good filter to filter their email directly to junk because of the keywords involved.

Each email is illegally solicited without an unsubscribe link at the bottom.

Today's email involved buying AppleCare without a box at a discount. I am not aware of such a reseller program.

Here is the page from the Mac Support Store website:

Usually a place that has to include a disclaimer like this on a page is scam:

"Apple products may only be purchased at an Authorized Apple Reseller Location. The Mac Support Store enables up to date anti-fraud safeguards, and will prosceute all fraudulent orders to the fullest extent of both national and international law. Additionally, we report any fraudulent activity to the FBI Internet Fraud Complaint Center at www.ifccfbi.gov."

Notices like these are usually given so as to give an appearance of integrity and a false security that the site is on the up and up. After all, why would a site be interested in fraud complaints that is a fraud themselves?

Also, Apple products can be sold anywhere by anyone ... warranties are still valid if within warranty no matter who buys, sells, or posseses the unit.

And just a question, what the heck does this mean?

"The Mac Support Store enables up to date anti-fraud safeguards..."

Then there are MANY product descriptions that have grammar problems like this:

A couple other notes about Mac Support Store:

1) When I called, I was placed on hold, and never responded to - not once - but twice

2) As you can see in the first graphic - Mac Support store claims to be Apple Authorized - yet, I couldn't find them here

3) You can also see in the first graphic that pages do not render properly in Safari (they do render fine in Internet Explorer & Firefox) - but what Mac Store doesn't cater asthetically to Mac users?

4) The entire website is obviously created with an editor, yet the editor information has been removed (I looked at the source of some pages) - I would imagine the web site designer would be very displeased and the editting program always leaves a credit to the software used to create it.

"...there is a press release about their Apple Care Direct at Macsimum News. Since it's something they came up with themselves, you wouldn't expect to see it anywhere else, so you can't hold that against them. It would be interesting to know exactly how it works, and if Apple has anything to say about it..."

Thanks for the link to the Macsimum page, but read this [from the same page]:

"The Mac Support Store, a Mac consulting-support company, has launched AppleCare Direct, an alternative to the AppleCare in a box program from Apple. It’s designed to be less expensive and faster than traditional AppleCare, according to Mac Support Store CEO Jeff Graber (who is also a contributing editor for Macsimum News)."

A little bias and not really a press release is it?

Also, they are pitching this as AppleCare - this is NOT an Apple sponsored service!

If they are J.U.M.P. - then they should have changed that - The Mac Support Store has been as it is today and as pictured here in this BLOG for 3 months that I know of

Besides, none of this explains how they got my email address and why they have an illegally solicited advertisement because there is no unsubscribe.

I did sign up at Macsimum News to make comments though, so if I find my email was sold or used for marketing purposes I will take action.

Besides, the discount off this service, even if legit, is not equivalent to a missing Techtool CD - which program retails for >$100.00.

My guess, is, if this is LEGIT, then they are selling the TechTool CDs either in bulk to a third party OR selling them on eBay themselves!

They're never on iChat either as the website claims.

did they answer? They show up ... but never answer in my effort to contact them (with a legitimate question)

Fa! I've been cleaning up after Jeff Graber and his clowns at Jump (now Mac Support Store) here in NYC for years. It's virtually assured that if I go into a Mac-using business and Graber or his clowns have been there, I'll discover misconfigured servers, strange "solutions" to a simple problems, and unusual software installs (often with zero documentation for compliance). I hate to badmouth anybody, but my experiences here in NYC are that Graber and his buddies have little, if any, idea what they're doing.

So I'm not surprised that Graber's latest "press release" (and jeez are we all tired of his clumsy attempts at building press or buzz) is selling a service that competes with AppleCare. Who knows how reliable it is, or whether it's legal to use the trademarked word AppleCare in his attempt to solicit warranty purchasers.

Look, everyone has a right to build a business. But Graber needs to focus more on doing his Mac consulting jobs better and allowing word-of-mouth to spread his reputation as a skilled Mac shop than try to build it with schemes like this.

And no I'm not a competitor. I got out of the consulting biz awhile ago in favor of something a little less draining and far more interesting. But I still won't recommend Jump/MacWhatever to anyone who asks for a referral, for the same reason I don't send my people to TekServe. You want the job done right the first time around, not long waits and excuses.

Thanks for the report ... this was actually an older story that I posted here to be visible within this BLOG.

I had DOZENS of emails similar to yours pretty much saying the same thing when I first wrote this story.

If you google Jeff Graber you pretty much find crazy "Bill Palmeresque" or "Dvorakesque" opinions. You also find business scam after scam.

I wanted to bring the "Mac Support Store" to the Jackwhispers reader attention!