Another Day, Another iPod Scam: About iPodMyPhoto.com / Could Lugz Also Sue Them?

With the weekend news that Apple was being sued by Lugz over the most recent iPod Ad campaign, I thought I would post this story from fall 2004 about iPodMyPhoto.com. In a way, there's a new spin to this ... could Lugz also sue the website iPodMyPhoto if he creates yellow background "Eminem iTunes like" ads?

Another Day, Another iPod Scam

The subject of today's FixYourThinking article is a new website called: iPodMyPhoto.com This site promises to take your photos and turn them in to a close facsimile of the iPod Television and Print ads as seen below. 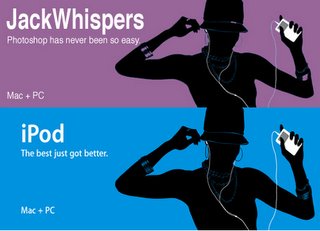 If you will notice the picture above isn't totally color saturated with purple. That's because I took an iPod ad that already exists and changed it into a color scheme that matches Jackwhispers. I wanted to see how long it took me to do it. If I had spent maybe five more minutes on it, it would be indistinguishable from an original Apple ad.

I have to give credit for the entreprenurial spirit, but this should have been a web tutorial rather than a business model.

According to a whois search, IPODMYPHOTO.COM was registered on November 23, 2004 by:

I also have to give credit for putting up such a nice website in this short of a time period: 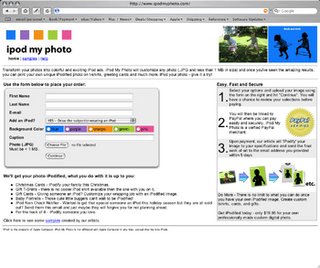 The reason I present a snapshot of this website to you above is; I hope to maintain it for posterity sake. I would be very surprised, if after today, Apple lets the website stand. It is a blatant ripoff of conceptual art and design done for Apple and is in complete disrespect for the people that came up with the ad campaign.

"Imitation is the sincerest form of flattery"

I don't agree with that quote in this case. Mr. Swayzine had two options for this:

1) Create a nice web tutorial & submit to a major Mac News website (even this one)
2) Create a website & try to take advantage of people for $20
3) Then of course, there was the 3rd option; just not do it at all!

Don't fall for this ... there are several tutorials available online. I was able to find a good one by doing a quick search in Google:

Email ThisBlogThis!Share to TwitterShare to FacebookShare to Pinterest
: advertising, iPod