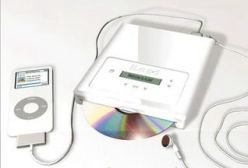 [from Tech Ticker] The iLoad is used for ripping CDs (compact discs: the medium of choice after cassette tapes and before MP3s) and transferring the contents directly onto an iPod. We heard somewhere that a computer is also capable of this amazing feat, but who are we to knock a product that simplifies the process and makes it portable? Along with the lack of specs is, of course, a lack of price, but that info should be available in no time as the manufacturer promises that the iLoad will be “Loading Soon!”

Looks like Bill Palmer's nationwide service employing 100's of reps was just replaced for the price of $149.99 ... less than his own service to "load 100 CDs for you"

I've always thought that Bill Palmer has overvalued his service (LOADPOD), certainly over estimating it's reach and "pioneer" claims. This only strengthens that opinion.

The other great thing about the iLoad is that it will also convert cassettes and Vinyl records - due to it's audio in jack.

Truthfully, I think this is a great way for small computer businesses to break into offering this service for it's customers.

The Historical Bill Palmer; Not In Any History Books

The iLoad inventor, Sanford Schupper, is also a crook in JC's league.