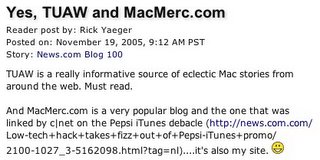 1) mercenary (as in "adventurer") n. : a person hired to fight for another country than their own

2)mercenary (as in "materialistic") adj. : marked by materialism

3) mercenary (as in "mercenary(a)") adj. : used of soldiers hired by a foreign army

Last week, I reported that I felt a certain semi popular Mac website had either lifted an idea from this website (most likely scenario) or just not done enough research to see if another website (cough cough ... this one) had already reported it. I didn't really care that someone had used an idea from this site, or even missed that this corner of the web had reported it first. What I did care about is that the webmaster of MacMerc Rick Yeager had been so nasty to me once it was pointed out to him, and chose not to give credit once it was pointed out.

I'd like to back up a second ... step into reality and stop being pretentious. I realize that it's quite easy and extremely possible others have the same thoughts as I post on this website. It's actually VERY hard to lay claim to any original idea in today's BLOG infested, over media medicated society ... but ... I don't think that's what has happened here. (As exampled in the picture at the top which I will now explain)

Rick Yeager, MacMerc webmaster, posted in a forum after I pointed to my story that was well publicized on Macsurfer, CNet, and other headline aggregators 11 days prior to his story.

Here is a picture of what he said (from the MacMerc website): 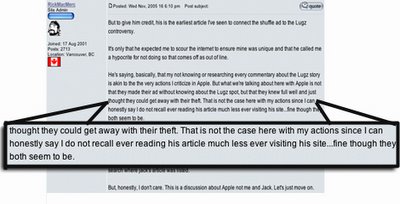 And here's a quote from an email sent to me by Rick Yeager:

"Could it be that some people don't read JackWhispers at all? Might their be people who have never heard of JackWhispers?"

* His incorrect spelling of there not mine.

Jackwhispers was named one of the TOP 100 Blogs in the BLOG 100, Rick Yeager posted here that he HAD read all of the BLOGs featured there and even whored his own site that DIDN'T make the list.

If you think it's hard to come up with original ideas on the internet ... trying lying ... it's even harder!

So, had Mr. Yeager seen this site? You be the judge. I say Mr. Yeager thinks this site is such an insignificant part of the web that stories reported on his site will seem to get more press. His site is nothing but a headline agrregator, with rare original content.

Email ThisBlogThis!Share to TwitterShare to FacebookShare to Pinterest
: MacMerc