A Protest Tool For The Nano Scratchers? 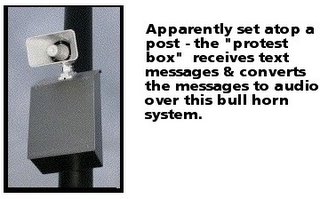 As reported by ENGadget

So you don’t think that posting your thoughts to a public SMS sign is enough of an attention-getter? How about trying the “Tool for Armchair Activists,” a combination cellphone, voice synthesizer, and bullhorn that converts incoming text messages into (loudly) spoken public discourse. The system’s designer, UK-based Troika, claims that it “allows the armchair activist to shout out its [sic] rants and protests in the comfort of his living room.” We used to think that a big part of protesting was actually taking the time and energy to show up somewhere for your beliefs, but now we know that you’re just as dedicated to the cause by shouting robotic-sounding epithets at The First Family from a glorified P.A. system attached to the White House security gate...

I realize this is a little off topic, but very relevant to the theme here at Jackwhispers. Often, protesters think they have rights - such as free speech, when protesting - when in fact - the 1st ammendment was created solely as a RIGHT to redress the government.

1) The utility that put them there

2) The business or home owner

Part of the effectiveness of protesting is a human body - showing effort and dedication to your cause.

As a business owner, I'd make sure I had proper permits for my weapon of choice and blow it off. Or maybe put a 25 pound magnet on it and make it screech - annoying everyone that went by, placing a poster beneath it - indicating the identity of the "cause of the screech".

Email ThisBlogThis!Share to TwitterShare to FacebookShare to Pinterest
: problems with MP3 players, Protests

I have read earlier items by you stating your belief that the First Amendment is only for use against the government. I believe you are mistaken.

"Congress shall make no law respecting an establishment of religion, or prohibiting the free exercise thereof; or abridging the freedom of speech, or of the press; or the right of the people peaceably to assemble, and to petition the government for a redress of grievances."

It seems pretty clear to me that it enumerates that all citizens have freedom of speech already and that Congress may not pass a law limiting that pre-existing freedom.

If you are suggesting that the entire First Amendment limits speech, the press, and peaceful assembly only to redressing grievances of the gov, where does that leave the now orphaned "no establishment of religion" clause? There are even helpful semi-colons between each clause, clarifying each pre-existing freedom.

Nope. Americans have freedom of speech as a birthright (according to the US Constitution anyway.) It's not a very bitter pill to swallow.

Thanks for the critique -

"Congress shall make no law respecting an establishment of religion, or prohibiting the free exercise thereof; or abridging the freedom of speech, or of the press; or the right of the people peaceably to assemble, and to petition the government for a redress of grievances."

This says to me that no NATIONAL law that is passed by Congress can limit a TARGETTED group or individual.

All of these "rights" are ways of redressing the government:

This is certainly a "I say, You say" debate that has been carried on for over 2 centuries now, and more prominently within the press as media has developed in the 20th and 21st century.

Not abridging the freedom of speech at all, certainly means that one could libel, slander, steal all they wish and not receive impunity.

I think the Framers would have said, NO LAW can be passed by any government funded mandate - instead of congress. I also believe that this ammendment was part of the founding of this country - to never allow government to become Orwelian.