I have seen a disturbing pattern developing amongst a very popular Apple reseller in the Mac Community; Other World Computing. Larry O'Conner: Other World's CEO; is nothing short of the King of Acquisition as far as getting good deals and good contracts to pass along to his customers. I have bought literally thousands of dollars from Other World Computing over the years. Recently, I started to rethink my opinion of Mr. O'Conner, the way he does business, and my patronage.

First off, and this is honestly my biggest beef ... his sponsorship. Internet sales for Other World are enormous. Other World advertises on just about every Mac website I visit. Other World even sponsors my favorite Mac website: XLR8YOURMAC.COM. He is a big advertiser on DEALMAC.COM as well. (Another favorite of mine)

But, I have also seen sponsorships of Think Secret. Think Secret hurts Apple in every aspect of the word; not helps. To sponsor content there is abominable. A certified and authorized Apple reseller could also be construed as a source that feeds these rumor websites. Did you hear that Small Dog and PowerMax?

Second, I have had two problems with orders (out of around 50) where things went completely the opposite of the way they should go. One incident occurred when I ordered some USB wireless adapters back in January of 2005. Pictures (very small), full model number, and description were on the website upon order. Instead of receiving wireless adapters, I received wireless routers. After over an hour on the phone with limited customer service, I was able to get a return authorization approved. My RMA email stated that I needed to pay for return shipping. I called again and told them that my paying shipping costs was unacceptable. Long story short, I ended up speaking with Larry O'Conner directly through email a few days later and getting the issue resolved. Yet, I was still belittled with the excuse that staffing at the main store was limited due to employees being at MacWorld Expo in for the week and told that the description and picture were correct; the model number was incorrect. (Like it mattered and said so insistently like I was one who made the mistake.)

In case you think I'm an idiot because I couldn't tell the difference by the picture, here's the Belkin 6130 Router I received (top) and the Belkin 6050 wireless adapter (bottom) The pictures on the OWC website were 20% of this size:

Third, The Roadtrip. I did a story on the Roadtrip last year upon it's introduction. It's just lame to call a competing product the same thing. See, The Lame Game Of Using The Same Name for more details.

Fourth, I noted that OWC was selling DVForge leftover merchandise. While this gave a lot, of credibility to my story about DVForge going out of business - I also see it as endorsement of Jack & Company and the carnage he brought to Apple and 3rd party Apple developers.

That brings us to today ...

A couple weeks back, I saw the press release for the Newer Technology NuStand Mini. This is an acryllic stand for your monitor that fits over the Mac Mini. Sounds cool right? It's $39.99 + shipping! Still sound cool? It's an acryllic file sorter you can get from ANY office store for less than $14.00! Still sound cool? 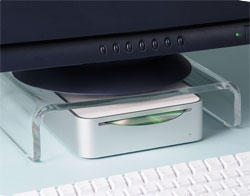 The worst thing about the product page is this statement:


NuStand Mini
Newer Technologies presents another in its line of innovative accessories for your Mac mini.

This exact same stand is sold by another manufacturer for much less (see www.plasticsmith.com)

Of course, Other World Computing's website is called MACSALES.COM.

See what Apple has to say about that:

1. You may not use the Mac trademark standing alone except to denote or refer to the Apple Macintosh product line.

2. You may use "Mac" in your product name, company name, trade name, or service name provided your name satisfies the following criteria:

a. Your product is not a computer, computer system, or operating system software.

b. Your product is Mac compatible or the third party business is associated with Mac based computers.

c. "Mac" is used in combination with another non-generic word.

d. "Mac" does not appear more prominently than the rest of the name in size, color, or typeface.

e. Your name does not suggest a false association with Apple.

f. Your name is not confusingly similar to any trademark owned or used by Apple.

g. You acknowledge that Apple is the sole owner of the "Mac" trademark and that you will not interfere with Apple's use or registration of "Mac" alone or in combination with other words.

Apple actually uses the name MACSALES.COM as an example of a name you cannot use.

Finally, I wanted to address the talented, but "badboy hacker" employees at Other World.

Soon after iDVD came out; I remember OtherWorld releasing a utility that allowed Mac Users to utilize external drives to burn DVDs from iDVD. Essentially, you could buy one of Other World's External Drives and get a hack that allowed you to burn DVDs externally - a feature that Apple locked out of iDVD, but included in DVD Studio Pro. Good reason or not, valuable utility or not, and my personal opinion of the usefulness and immense value the utility has; put aside - it was not cool to undermine Apple in this way. iDVD is such a compelling reason to get a new Mac or to get the feature of DVD burning built in ... that many would opt for such upon purchase. When potential buyers heard of this utility, I am certain it cost Apple sales (but gained sales for OWC). Apple eventually sent a cease and decist and OWC complied.

I have never been able to find out whether Ryan Rempel, creator of the amazing utility; XPostFacto, that allows OSX to be installed on 7500-9600 Macs, is employed by Other World Computing. All indications are; yes, he is. This utility certainly sells processor upgrades for OWC. Again ... good reason or not, valuable utility or not, and my personal opinion of the usefulness and immense value the utility has; put aside - this has had a significant dent in the sales of new computers sold by Apple. I have used this utility personally on well over 100 Macs in my time as an Apple Technician. I have also made the association that this is one small reason Apple made the switch to Intel - to reduce the Apple processor upgrade market into nothingness.

Readers may think the last point, of useful software hacks being irresponsible to distribute; nitpicky. In a way it is, but it does illustrate a point that I find common to CEOs such as Larry O'Conner, Jack Campbell, Bill Palmer - they often bite the hand that feeds them and damned be the competition ... in business ... all tactics are fair. I say that because any of the other competitors could have released these utilities ... ANY! They chose not to though, because they are contractually bound, kharma aware developers!

See other stories on OWC by clicking on the OWC tag below.

i agree with the naming of the roadtrip. griffin had a two or three month advance and it looks to be a unique product. it appears the 'newer' roadtrip is a rebranded product. I've seen that very adapter in 100 different forms.

a good analogy: it would be like Hyundai coming out with the Hyundai Corolla or Hyundai Mustang

I have found OWC to be dishonest.
I tried to return a product and they told me no because it was a used item. I have an earlier email saying it was a new item, so they lie rather than do an honest return. They told me that "most people just sell them on Ebay"... quite the friendly business model.
Twice I had problems and half truths. I am no longer a customer, and if you plan on doing business with these sleaseballs, I would do better research.

I have found OWC to be dishonest.
I tried to return a product and they told me no because it was a used item. I have an earlier email saying it was a new item, so they lie rather than do an honest return. They told me that "most people just sell them on Ebay"... quite the friendly business model.
Twice I had problems and half truths. I am no longer a customer, and if you plan on doing business with these sleaseballs, I would do better research.

Apparently nothing has changed.

I thought I was dealing with a reputable company when I purchased a firewire drive from OWC. It came bad out of the box. I had to pay the shipping to return it. They shipped me a new one, which was just as dead. They not only are charging me again for the shipping return, they are subjecting this return to a 15% restocking fee unless I try another drive or take an in-store credit -- the last thing I want to do given the track record and the added costs that the shipping and insurance entail.

I've been buying equipment over the Internet for ten years, in many cases for labs at a university, which means I've seen a lot of volume. This is an unusually bad experience. There are lots of other sources for hardware out there. Avoid Other World Computing!