Jack Classic: You Got To Be Real! 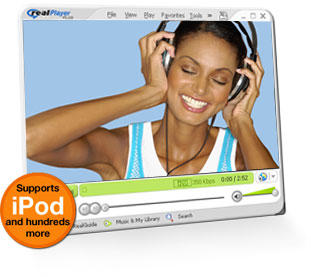 I thought I would post this Jack Classic because of today's $761 million dollar payday payout from Microsoft over antitrust issues with Windows Media Player and Real Player. (story to follow tomorrow)

You Got To Be Real! Real Networks Reputation REALLY On The Line

Got To Be Real ~ Cheryl Lynn

I never have thought too much about Real (as in Real Networks) - the compressed internet video content delivery competitor to Quicktime. I've always thought the business model was questionable. The Free Realplayer is only free if you read ads, go through a very tedious registration and download process, and THEN get content that is about half the quality of Quicktime.

I hate to watch a movie trailer in REAL format. First of all, it doesn't even always play. Second it loads a cache file on to your desktop labelled as a .rm file. It's annoying to have throw these files away.

QUICKTIME (The Village): Quicktime Stream Of The Village

Beware, if you are on a PC or aren't using a pop up blocker in your Mac's browser. Real.com is FULL of pop ups. The website also installs spyware onto PCs.

In a little surprising move, Real announced this past week that they have used a hack to allow songs downloaded from Real's Music store to work on the iPod. Here's snippets from two news stories that should explain what's going on:

[UPDATE] - In an e-mail sent to Apple CEO Steve Jobs, RealNetworks CEO Rob Glaser suggested that the two companies form a "tactical alliance" against Microsoft in the digital music business. But if an alliance with Apple could not be struck, Glaser hinted that he might form a partnership with Microsoft to pursue "very interesting opportunities," according to the New York Times. Glaser reportedly asked Jobs to consider licensing Apple's Fairplay digital rights management technology to RealNetworks to allow users of the RealNetworks music service to play their digital music collections on iPods. In exchange, RealNetworks would make the iPod its primary device for its music store and for the RealPlayer software. ~ From MacMinute

[UPDATE] - "We are stunned that RealNetworks has adopted the tactics and ethics of a hacker to break into the iPod, and we are investigating the implications of their actions under the DMCA and other laws. We strongly caution Real and their customers that when we update our iPod software from time to time it is highly likely that Real's Harmony technology will cease to work with current and future iPods." ~ Official Apple Press Release

Real uses the Hymn Project hack to acheive this. What kind of reputable company does this sort of thing?

The "technology" is called Real Harmony. It's more like Real Low Downy!

If you've ever listened to a Real Music Store song vs an iTunes Music Store song - thre is a quality difference. Apple's songs are much crisper and have higher treble response than Real songs. THIS IS one of the main reasons Apple doesn't want someone like Real - users may not remember which store they got the music from when playing it back. They might even associate a poor quality download with Apple or iTunes.

** Real has several names for it's Music Store: Rhapsody and Listen.com **

"RealNetworks has now responded to Apple's statement on its Harmony technology, which allows songs purchased from Real's online music store to be played on iPods. Real says that "consumers, and not Apple, should be the ones choosing what music goes on their iPod." The company goes on to say: "Apple has suggested that new laws such as the DMCA are relevant to this dispute. In fact, the DMCA is not designed to prevent the creation of new methods of locking content and explicitly allows the creation of interoperable software. We remain fully committed to Harmony and to giving millions of consumers who own portable music devices, including the Apple iPod, choice and compatibility."

"Harmony follows in a well-established tradition of fully legal, independently developed paths to achieve compatibility," Real says. "There is ample and clear precedent for this activity, for instance the first IBM compatible PCs from Compaq. Harmony creates a way to lock content from Real's music store in a way that is compatible with the iPod, Windows Media DRM devices, and Helix DRM devices. Harmony technology does not remove or disable any digital rights management system."

Note the statement, " independently developed paths " - this is an untrue statement, at least from what i've read. I've been following this very closely on Slashdot and it's a common sentiment that Real used Hymn, a program which strips the Digital Rights management from iTunes store songs, to assist in the devlopment of this program. Eventhough HYmn is open source, it would be a good time for an open source developer to make a case about rights and recognition under the GPL.

[UPDATE] Jackwhispers editor note: I wanted to add this rather insightful post from an anonymous poster on Slashdot.

"RealNetworks was hypocritical to demand Apple free up its iPods when its own Rhapsody song shop doesn't support Macs,""