* Originally posted in March of 2004 and updated twice over the course of the year. Many of the articles that were posted to Jackwhispers before the site redesign and subsequent reader increase of almost 3000%, remain relevant. A story about a possible "Malware vulnerability" on the Mac platform popped up right before Halloween 2004. Read below:

Over the weekend, Apple made an official statement about a new threat that Symantec had "exposed" concerning Mac OS X.

Here is the story as reported by MacMinute:

Apple: 'Opener' malware not a virus

Apple has denied that the malicious code dubbed "Opener" is a virus, Trojan horse or a worm. However, the security community disagrees, saying that while the program is not an immediate threat, it is a worm because it attempts to copy itself. "Opener is not a virus, Trojan horse, or worm," Apple said in a statement. "It does not propagate itself across a network, through email, or over the Web. Opener can only be installed by someone who already has access to your system and provides proper administrator authentication. Apple advises users to only install software from vendors and Web sites that they know and trust."

Here is the original FYT Story:

One of the many things I like about the Mac is that there isn't much worry about computer viruses. In fact, only recent viruses have even made an impact on the Mac side of email. Both the SOBig and MyDoom viruses filled my Mail.App inbox. (SoBig to the tune of 200-300 an hour for 72 hours straight) Alas, my Mac and Mac network was not infected, it was a just pain to have to read and delete so many subject lines. You think that's a lot ... well it was ... eventhough I get about 800 junk emails a day.


One of the ways I TRY to prevent email spread viruses is by asking that people not keep my email address in their address books. Many people don't pay attention to this on eBay. If they bought something they liked from me, they add me to their MS Outlook/Entourage address book. Usually, I can trace an email spread virus back to a recent eBay customer.

Most email you get nowadays isn't actually SPAM, rather; it's a hack into your inbox. Hackers have found that a legal way to have fun at hacking is to hack your email. 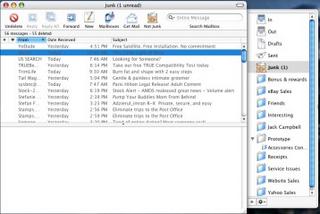 An article on Slashdot really got me to thinking of a new threat in the virus attacks. I believe this one could soon make it to the Mac. After all, there are as many fans of the Macintosh platform, as there are haters. There are some that dislike Macs so much, that they would do "something" to "show us a thing or two about how Macs suck". Does that sound kind of like "gang talk" to you? Well it is. A recent story has indicated that the most current strings of viruses may be perpetrated by a new type of gang, a modern gang; a "cyber gang" if that shoe fits. Experts believe that viral computer attacks may be one upping the other; just to show who's the top - who's better - and which gang is better. Communications between gangs like this most likely carry on anonymously through internet telephony or even chat clients like AOL Instant Messenger. These gangs most likely use Linux; the most recent attacks have been directly on Microsoft and a company that the Linux community loves to hate called SCO.

I post regularly on Slashdot. Whenever there's a story about Apple or the Mac platform; HUNDREDS of posts iterate hatred for Macintosh users and the "blind loyalty" they seem to have. There are geeks out there that I'm sure would love nothing better than to "show Mac fanatics a thing or two".

A lot of critics say, "The Mac market share isn't big enough to spread a virus." To me; telling me something isn't necessary, isn't feasible, or that I'm not capable of doing it; makes me; want to do it even more.

The internet represents the greatest form of free speech in history. The world is becoming addicted to the power free speech has. Words and technology in today's society can be much more powerful an influence and a much greater addiction to prey on than drugs.

I don't find any fortune in the fact that Macs haven't had a virus attack, I only find the delay comforting. Let's not tease fate and think the Mac platform is immune. (Eventhough; Apple is very quick to address security flaws. There are fewer holes in the Mac OS than Windows.)

[UPDATE] On April 8th 2004 a company called Intego that makes the Macintosh virus software Intego Virus Barrier made a press release that a Trojan Horse virus has made its way on to Macs. Just about EVERY website has now debunked the claim saying A) It's not even a virus (which it isn't ... nor is it a trojan horse) and B) This type of vulnerability has been around for years and is in and of itself benign because even though the virus code is there it cannot be executed.

Apparently, people have unknowingly downloaded files that look like MP3's - the virus is contained in the ID3 tag or the information tag that tells the artist, title, and track data for the song.

A very sharp eyed reader at MacRumors noted this graphic on the Intego website:


Can you say... "shameful marketing ploy"? Here's some interesting information from the who is record for the Intego.com website:

I found it quite ironic that most of the artwork and pictures I could find, through Google, about computer viruses; show Macs or Apple Computers.

Email ThisBlogThis!Share to TwitterShare to FacebookShare to Pinterest
: virus