Jack Classic: Are You Calling Me A Dummy? 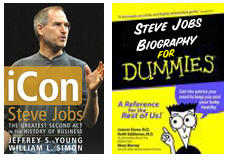 This Jack Classic comes to you today because of this recent headline from MacMinute:

Jeffrey S. Young, author of "iCon Steve Jobs: The greatest second act in business history," will make his first public appearance in front of the Macintosh community since the book's publication at the Southern California MacFair 2005 on Saturday, November 5 at Cerritos College in Norwalk, California. This is the book that Steve Jobs tried to ban. Prior to the publication of the book, Apple pulled all of the books from the publisher John Wiley & Sons, from its Apple retail stores. Young's keynote address is titled: "What's Wrong with Steve and Right with Apple." His live presentation will begin at 12:30 p.m. PT on Saturday, November 5 and is open to all general admission attendees of the SoCal MacFair.

What kind of Mac "expo" or "Apple fan get together" has a hated author; keynote? I certainly would protest this event if I was in California. Read below to see if you should too!

Are You Calling Me A Dummy?

Cat Out Of The Bag ~ Michael Angelo

Listen to it & buy from

You know, I don't see what people see heavy handed about Steve Jobs telling Apple Stores to remove all the titles by Wiley & Sons press... because it plans to come out with an unauthorized & inaccurate biography on the life of Steve Jobs.

Many are stretching this into a pattern that is growing at Apple about being "Big Brotherish" like Microsoft - referring to the Rumor Site lawsuits and to the crackdown on the peer to peer network distribution of OS 10.4 developer prebuilds.

Wiley & Sons is the popular publisher of the Dummy Series of books. I have NEVER liked the demeaning titles called:

Believe it or not, quite a few people have never heard of such a book ... I have always found it insulting to a customer for them to find a book in a store that implied they are a dummy!

Tech book publisher John Wiley & Sons says Apple has removed all of its titles from the company's retails stores in retaliation for an upcoming biography of Apple CEO Steve Jobs. The author of "iCon Steve Jobs: The Greatest Second Act in the History of Business," Jeffrey S. Young, said Wiley's books disappeared from Apple Stores last week after "a month of increasingly contentious discussions about publication of the book," according to the Mercury News. "It became increasingly clear that Apple was not happy with the publication of the book," Wiley executive Kitt Allan said Monday. "Recently, the meaning of that became clear when Apple told us that our technology books were immediately being pulled from their Apple retail stores. But, of course, Wiley stands behind our authors."

As for the San Jose Mercury News being the source material for this interview in the report above ... what the heck has happened between Apple and The Mercury News? They are becoming as bad as TellOnApple.org about insulting Apple and Apple Fan intelligence. Apple fans in the area should cancel their subscriptions. Besides, a relative of mine says it's more bias than the LA Times and isn't a good paper anyway!

Recently, the San Jose Mercury News was one of the first papers to side with Think Secret and The PowerPage - by writing an open letter to the judge in the case - stating that bloggers are journalists and have the 1st ammendment right to publish Apple Trade Secrets.

2) Think Secret cannot, by law, report SPECIFIC information due to the UTSA

4) The PowerPage & Think Secret are related in some way

6) The Think Secret lawyer at the EFF has a longstanding beef with Apple over iTunes and is the lawyer for an Apple hating website called downhillbattle.org

Honestly, I wish Apple would have pulled the Dummy Series of books a long time ago and just kept David Pogue and O Reilly's How To Books.


I forsee a lot of customers in the Apple Retail Stores this Friday - possibly the biggest crowds EVER for an OS launch event. I'm glad none of the potential shoppers will have to look on the shelf to see the word "Dummies"!

[UPDATE] A post on Slashdot also brought up an interesting point ... the title conciously and subconciously portrays Jobs as a con man with the word "iCon" as the title.