I'm taking suggestions for a "No more Dvorak petition" ... to stop reporting on Jack Dvorak! 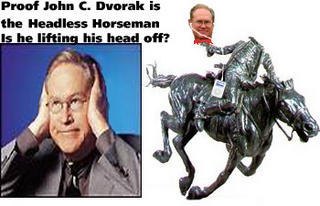 In between my duties (of my "other life") - I'm writing up a petition at PETITIONONLINE.COM concerning John C Dvorak - asking mac and technology websites NOT to publish any more of his stories. If you have any ideas or suggestions for wording, feel free to post them.

I hadn't thought of this until a friend mentioned it to me yesterday: Jack is a nickname often used for John - usually when there is a I, II, or III in a family.

"As a community of intelligent computer users across the globe; we see Mr. Dvorak's continually off base, and irresponsible journalism as sensationalist and self serving. We, as computer users ask various internet websites to participate in a ban on mention of Mr. Dvorak or any opinion he publishes in print. As Mac users, we see Mr. Dvorak as a pariah used only as a pawn in competition against Apple. His predictions of death to Apple technologies and Apple Computer itself, is a real threat to Apple financials and fair Apple trade.

If Mr. Dvorak had a disclaimer that of his intentions or purpose of his editorials to drive traffic to his own website or to a publisher of his articles; his editorials might have entertainment value. Often, financial analysts pick up on Mr. Dvorak's comments and noticeably affect Apple technology acceptance and sales."

Therefore, we the undersigned, commit to the following:

1) Not patronizing any advertisers of sites that promote John C. Dvorak articles.

I hear what you are saying but not 100% sure I agree. While Dvorak has come up with some ridiculous assertions about Apple in the past he has ben pretty decent of late. If you listen to the TWIT podcasts a number of times he has had some pretty pro Apple takes on issues like OS X market share, and it's potential to grow, as well as the racketeering charges that should be brought against MS for releasing a subscription service to protect against adware and viruses, that exist because of the shoddy product they sell in the first place.

I realize his last article, about journalists being pro-Mac because they use Macs, was ridiculous but there are other "tech pundits" out there who are more deserving of disdain from the Mac community.
Rob Enderle chief among the.

Anyway, just a thought, like the wording of the petition though. Good stuff.

Thank you, I am taking email suggestions and should have the petition posted by the weekend.