The claims between competitors ... 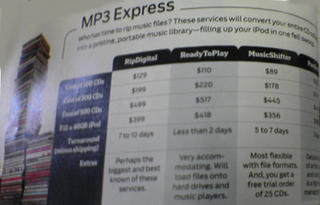 Bill Palmer made a press release on Thursday concerning iPod Nano "loading" - over the last 24 hours I have received several emails from varying sources asking me to post this:

"LoadPod, the nation's leader in iPod loading services, came into existence in May of 2004 when iPodGarage.com Publisher Bill Palmer began searching for an iPod loading service that he could recommend to his readers. But because the iPod loading industry hadn't been invented yet, he decided to go ahead and invent it, building his own service from the ground up with the customer in mind."

[ REDUNDANT JACKWHISPERS COMMENT ] RipDigital is the #1 service rated in the June 2005 issue of Popular Mechanics. LoadPod isn't even rated or mentioned as a "loading service" ( 9 other services are rated )