The Historical Bill Palmer, Not Found In Any History Books

"After all, every now and then, I have to remind the world that I single-handedly built the iPod loadingindustry from the ground up."

[The quote above is exactly as it appears on the BillPalmer.net site]

I wish Bill would take the time to link to, post video of, or provide any solid proof that LoadPod is even a player in the "iPod Loading Industry" and proof that it's a money maker. News sources contacted that Bill quotes on his website deny any mention of Bill Palmer or LoadPod. (They did not vouch for any local level news stations, but Bill's references lead us to believe these were national news sources)

''LoadPod: it's the easiest thing I ever did!"

Here's a snapshot of the June 2005 Issue of Popular Mechanics. You' think that they would mention the pioneer of this service wouldn't they? 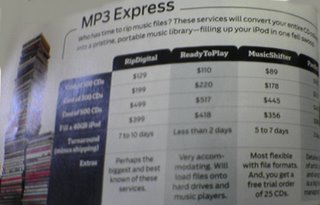 I'll also note that two weeks ago, Bill noted a weeklong hiatus on MacMischief.com - he returned with a few blurbs about meaningless news - and now hasn't updated in two weeks. Where was our warning message?

C'mon, give ol' Bill a break. He's right about sooo much stuff. He probably even gave Steve Jobs the idea about making iTunes and the iPod work TOGETHER. Bill Palmer is the single most important person in the Macblogosphere... or in the THE Blogosphere... in the whole Mac Universe because his opinion is the RIGHT one. He knows, even better than Apple, what the right thing for the company to do should be. It saddens me that you should write something so callous about Bill Palmer. In fact, I think I'll go and place myself prostrate at the Alter of His Palmerness right now.

Bill Palmer is quite a guy. Yes his both a gift to educators as well as mac users. He is truly amazing. I wish we could all my like Bill. Now, let me tell you about the he tried to tell you about the time he took on MJ..one on one. He beat him. He took it to the hoop and dunked on him time after time, all the while listening to his iPod listening to how he could fly.

I sent him an email once when he had it all wrong. He thought the mac mini was a horriblble idea because Apple did not sell an "inexpensive" monitor. I assured him they did and it was a Mitsubishi. His reply to me that I was a geek. Hmm...let's see...a geek wannabe?

Coincidentally the next week he was touting the mini as being a wonderful complement to the Apple family of computers. Oh well...

Bill Palmer. Bwa haa haa! I'm surprised he has the nerve to show his face on the web. In the months leading up to the release of the mini mac he continually laid down all his expert reasons that Apple would never make such a thing. When the cold fish of reality hit him in the face at it's announcement, he continued his rant on how this was a travesty, the worst mistake Apple ever made yada yada. His board was filled with hundreds of comments urging him to admit he was wrong, grow up, etc., he never did, at least not the last time I bothered to check his site. Sad.

Bill Palmer is a big mouth moron. His "predictions" are mostly wrong and his melodramatic writing "style" makes me puke.

Mr. Bill's 15 minutes of fame are into overtime. That anyone would actually read what he says it a testament to the lack of direction in American young people. He made a fool of himself on the Mac Mini--why would anyone care about his opinions? The best plan, however, is to ignore--not make him think there is some kind of controversy assocated with his importance.

"Mr. Bill's 15 minutes of fame are into overtime. That anyone would actually read what he says it a testament to the lack of direction in American young people. He made a fool of himself on the Mac Mini--why would anyone care about his opinions? The best plan, however, is to ignore--not make him think there is some kind of controversy assocated with his importance."

I would agree, but his frequency of lies and promotions are on the increase. I want iPod peripheral companies and advertsers to know what they might be supporting. This site is here to point out to retailers as well as consumers.

I do find it ironic (and telling) that MacMice is a supporter!

Blah ... no one knows this. Apple does not release individual sales figures by model any more. As far as I can tell ( I work in Apple Retail) the Mini is selling very well and I think the sales figures will prove that this coming week.

I would like to point out though that even if Bill is right (partially) he made up statistics and reasons as part of his argument.

His reasons are no different than saying George Bush cheated to win the Presidency. Neither can be proven beyond reasonable doubt with publicly available knowledge.

It's easy for any prophecy to come true from his Captain Obvious Editorials!

But, regardless of his editorials being right or wrong. he gives Apple, 3rd Party Hardware makers, and the entire iPod industry a bad name - even if his services and editorials are great products.

MacMice distributes great products too (for the most part) - but it's how the CEO conducts himself in both his private and professional life is what is disturbing.

None of the claims Bill makes about LoadPod are true - nor will he post publicly any figures to back his claims up.

None of his claims about the MacMini are true either - at least no real source will back him up - nor does he attempt to use ANY researched information. Something that is common with Bill Palmer rants around the web.