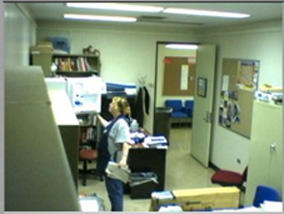 Wow, what perfect timing but a series of unfortunate events for the Apple Store in Pittsburgh:

As reported by Channel 4 TV in Pittsburgh:

"Thieves swiped about US$9,000 worth of Apple laptops at the company's retail store in Pittsburgh's Shadyside neighborhood, police said. "Surveillance video from Dec. 12 shows someone smashing through the glass front door at the store in the 5500 block of Walnut Street. A man is seen rushing to the back of the building while a woman grabs three laptops from a shelf. Both people then run outside. The entire episode takes just 19 seconds."

The reason I say perfect timing is because Jackwhispers has been preparing a story on the very topic of video surveillance on a Mac. I'll see what I can do to get it up for Christmas Eve.

... I am very interested in this and would like to bring someone in for a presentation to my Mac User Group. However, I would like to take this further. I have broadband that is always on and I have the idea to take a Mac that has been replaced but is fast enough to hook up a camera or two, that would stay on with an old monitor or the internet so I can see my office or home at night or when I'm away. It's not just for crime, it could be for maintenance, unexpected deliveries or power outages that upset your lights.
Bill M.