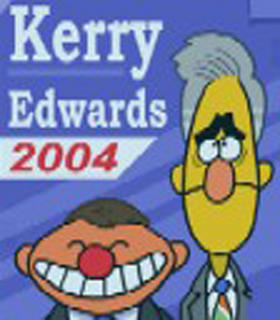 Best place to keep up with election results: http://news.yahoo.com/electionresults

Nader is a cartoon - no submissions necessary.

• In the 1829 election for the U.S. House of Representatives in Kentucky's 2nd District, Jackson Democrat Nicholas Coleman defeated National Republican Adam Beatty 2,520 to 2,519.

• In the 1854 election for the U.S. House of Representatives in the 7th District of Illinois, Democratic candidate James C. Allen bested Republican William B. Archer 8,452 to 8,451.

• In the 1882 election for U.S. House of Representatives in the 1st District of Virginia, Readjuster Robert M. Mayo defeated Democrat George T. Garrison 10,505 to 10,504.

• In 1977, Vermont State Representative Sydney Nixon was seated as an apparent one vote winner, 570 to 569. Mr. Nixon resigned when the State House determined , after a recount, that he had lost to Robert Emond, 572 to 571.

• In 1989, a Lansing, Michigan School District millage proposition failed when the final recount produced a tie vote, 5,147 for, and 5,147 against. On the original vote count, votes against the proposition were ten more than those in favor. The result meant that the school district had to reduce its budget by $2.5 million.

• In 1994, Republican Randall Luthi and Independent Larry Call tied for the seat in the Wyoming House of Representatives from the Jackson Hole area, with 1,941 votes each. A recount produced the same result. Mr. Luthi was finally declared the winner when, in a drawing before the State Canvassing Board, a PingPong ball bearing his name was pulled from the cowboy hat of Democratic Governor Mike Sullivan.

• In 1997, South Dakota Democrat John McIntyre led Republican Hal Wick 4,195 - 4,191 for the second seat in Legislative District 12 on election night. A subsequent recount showed Wick the winner at 4192 - 4,191. The State Supreme Court, however, ruled that one ballot counted for Wick was invalid due to an overvote. This left the race a tie. After hearing arguments from both sides, the State Legislature voted to seat Wick 46-20.